Light has been of interest to mankind from the very beginning, before men ever wrote down a word. It has been a part of worship since that time. Every single tribe, kingdom, and religion has Light in it somewhere. You can see it in cave petroglyphs and pictographs around the world. In short, you can find it as a basic element of mankind’s history.

Light has even become synonymous with Wisdom and Understanding.

The Mayo Clinic has even researched it as a healing mechanism for Seasonal Affective Disorder (SAD) — a depression that occurs during fall and winter. Their recommendation is to buy light boxes/bright light therapy boxes and use them 30 minutes a day. Amazon and WalMart have models available from $70 to $300 for blue light therapy.

Ergo, light is a component of our physical health as well. Amazing!

Light, of course, emanates from the Sun in all of the above. Hence, the Sun and Moon becomes a part of the mysteries surrounding these stories.

From the Egyptian Ra, Norse Sol, Vedic Hinduism Surya,  Greek Helios (Titan) and Apollo, Arabian Al-Lat, Australian Bila and Walo, Hittites Wurusemu, Babylonians Shapash, Cherokee Unelanuhi, Japanese Amaterasu, and Inuit Malina, it  turns out that all of the world just has a different name for the same idea.  Even Jesus Christ and Christianity is not exempt from it as demonstrated in the Bible as it exists today.

We are all concerned, in our own ways, with the words and meanings that we attach to our belief systems, to the exclusion of all others. Yet, even the Christ was concerned with Unity, including wisdom and understanding.

Perhaps we should be looking more to how we are all trying to get to the same place, even though it has a different name, instead of tearing down anyone who does not “think like us” or the “mini-me” concepts.

I have always wondered how each tiny division thinks it has the only answer and is the only “right” to be had. How could that be possible? How could a God, who created such individuality in every person, giving us the ability to make choices – and suffer the consequences of those choices – be so small as to make one sect “right” and the rest “wrong?”

Look at the differences in the Protestant religions alone. Even the Catholics are no longer just one religion. The Eastern Orthodox Religion, who possess the earliest known transcripts of the Bible, is different still. This does not include any of the names that I started this blog with. God made each of us like the snowflake, each of which is unique and not like any other.

In the Bible in John 12:35,36, Jesus said, “Yet a little while is the light with you. Walk while ye have the light, lest darkness come upon you: for he that walketh in darkness knoweth not whither he goeth. While ye have the light, believe in the light, that ye may be the children of light.” And in James 1:17, it says, “Every good gift and every perfect gift is from above, and cometh down from the Father of lights, with whom is no variableness, neither shadow of turning.”

That is pretty clear to me. I like the sound of “children of light.” How about you?

In the New Age/New Thought/Metaphysics concepts is the idea that God appears to you within your own framework of your understanding. (See my blog archive on God Is A Chameleon.) That does not exclude the idea that Multiplicity is what it is all about.

Dr. Marcus Bach and wife spent their lifetimes, living with different peoples of different religions. He sought to learn how we are all really trying to get to the same place, just a different name. The below Mandala represents his life’s knowledge, which he made into a six-foot Mandala, in his home. Please consider this carefully as you look at it: 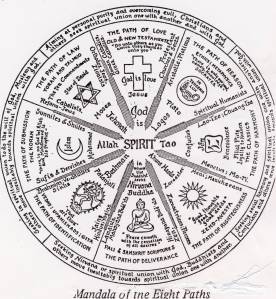 If you were to study this Mandala, it would be clear to you that, regardless of our personal beliefs, we are all driven by the same wants, needs, and desires. We cherish our loved ones, children and families. There are no political lines to be drawn, where someone on this side is right and all the rest are wrong. That is only a myth which drives the power of those who try to control and manipulate the masses, regardless of country.

John Denver sang the song, “One world.” It truly is.

If we are to be “children of light,” each one of us is responsible to make a difference by living the tenets of our belief system, whatever that is. Let us not be concerned with the division principle, but by the multiplication laws.

In Ken Keyes, Jr., book, “The Hundredth Monkey,” he very clearly documents the idea that: “When only a limited number of people know of a new way, it may remain the consciousness property of these people. But there is a point at which if only one more person tunes-in to a new awareness, a field is strengthened so that this awareness reaches almost everyone!” In his book, he talks about monkeys learning to wash the dirt off sweet potatoes, until it finally reached all monkeys everywhere due to the Hundredth Monkey Phenomenon. It has been documented by scientists for years that chimps, wild gorillas, etc., also demonstrate the use of tools for various reasons…checking the depth of a pool, opening nuts, etc. But it does not stay with just isolated groups…it spreads!

How about you? Are you willing to be that Hundredth Person to step outside your comfort zone, live by the beliefs you say you have, use them every minute of every day, and be one of the “Children of Light?”

Do you believe you, as just one person, can make a difference? Trust me, you can! Are you willing to try?

Life-long learning has been my quest always. There is so much in the world that brings us down. Like the old song says: "Eliminate the negative, Accentuate the positive..." Life, Love, Truth, Peace, Beauty, Laughter, Light, Joy = All these and more need to lift our spirits so we can soar. Daily wear and tear affects us all. Each one needs to take the time daily to look beyond the problems in our lives so we may find the solutions needed. I wish to use all my lessons learned to share uplifting thoughts with you. Come join me in trying to make this world a better place... :-) I have been happily married to author and poet W. Foster Welborn for 29 years. (His blog is URL: www.wfosterwelborn.com = RSS Feed is: www.wfosterwelborn.wordpress.com) He has 6 books on Kindle and 2 in print. I am his editor/typist. I currently have 4 more books that are in my finishing process. Watch for them!
View all posts by upliftingthoughts4u »